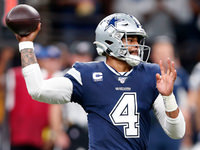 Start ‘Em & Sit ‘Emis the ultimate weekly look at NFL matchups and how they’ll affect yourfantasy footballteam.Fantasysuperstars such asPatrick MahomesandChristian McCaffrey will not be featured in this column. All player matchups are based on a PPR scoring system. For your final starting lineup decisions, checkmy weekly fantasy football lineup rankings.

Start of the Week – Tom Brady vs. Washington Redskins

Brady was a bust candidate for me last week, and he was even worse than expected with a 3.7-point stinker in Buffalo. He will rebound in a big way this week, however, as he’ll face aRedskinsdefense that’s surrendered 10 touchdown passes and more than 21 fantasy points per game to quarterbacks. Look for Tom to be terrific again.

Prescott put up a stinker last week, but I’d still trust him against thePackers. Green Bay’s defense has been awful against the run, which means good things forEzekiel Elliott. In turn, that will allow theCowboysto utilize play action often. Prescott ranks in the top four in passer rating using play action in 2019.

I admit, Murray’s last few games haven’t been great. Still, his floor is around 16 points and I think he’ll be better when theCardinalsface theBengals. Not only is their defense allowing almost 19 fantasy points a game to quarterbacks, but Cincinnati can’t stop the run either. That’s good news for the versatile rookie.

Winston is a hard quarterback to figure, but hie’s coming off a big stat line in L.A. and has a nice matchup next on the schedule. Their defense has allowed over 24 fantasy points a game to quarterbacks, so Winston is a worthwhile option if you’re lacking at the quarterback position or are playing in a fantasy super flex league.

Believe it or not, but Brissett ranks ninth in fantasy points among quarterbacks and is the lone player with multiple touchdown passes in every game. He’ll remain a viable option against theChiefs, who have surrendered an average of 276.5 passing yards and almost 20 fantasy points per game to enemy quarterbacks in 2019.

Sit of the Week – Baker Mayfield vs. San Francisco 49ers

Mayfield has lived in the sit ‘em portion of this column, and I’m keeping him here until further notice. This week he’ll be in the Bay Area to face a Niners defense that has allowed the seventh-fewest passing yards and an average of fewer than 13.5 fantasy points per game to opposing quarterbacks after three games.

Jones was a popular streamer a week ago, and he failed to meet expectations with a 12.3-point stinker in a win over theRedskins. This week, I’d keep Danny Dimes on the sidelines against aVikingsdefense that’s surrendered an average of just 239.8 passing yards and 15.3 fantasy points to opposing quarterbacks this season.

Sit of the Week – Marcus Mariota vs. Buffalo Bills

Mariota is coming off an impressive, 23.3 fantasy point performance in a win over theFalcons. I wouldn’t chase the points, though, as he next faces aBillsdefense that just heldTom Bradyto under four fantasy points. Quarterbacks also have a terrible 64.3 passer rating when facing Buffalo, so Mariota is a hard fade.

TheGiantshave allowed over 20 fantasy points per game to quarterbacks, so Cousins is a viable streamer, right? Not so much. He’s failed to score 13 fantasy points even against theRaidersa few weeks back, and game script could mean a lot ofDalvin Cookin the second half … and not much passing. Fade Cousins again.

Carr has struggled in the stat sheets, scoring fewer than 16 fantasy points in each of his first four games. He’ll be lucky to hit that mark this week, as a matchup against theBearsis anything but favorable. Their defense has allowed just four touchdown passes and an average of 11.9 fantasy points to field generals in 2019.

Michael Fabiano is an award-winningfantasy footballanalyst on NFL.com and NFL Network and a member of theFantasySports Writers Association (FSWA)Hall of Fame. You can follow Michael onTwitter,Facebook,YouTubeandInstagramfor all of the latestfantasy footballnews, notes and in-depth analysis! 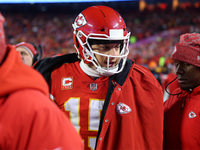